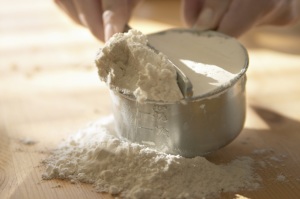 FORMULAS AND MEASUREMENT
Bakers generally talk about formulas rather than recipes. If this sounds to you more like a chemistry lab than a food production facility, it is with good reason. The bakeshop is very much like a chemistry laboratory, both in the scientific accuracy of the procedures and in the complex reactions that take place during mixing and baking.

MEASUREMENT
Ingredients are almost always weighed in the bakeshop, rather than measured by volume, because measurement by weight is more accurate. Accuracy of measurement, as we have said, is essential in the bakeshop. Unlike home baking recipes, a professional baker’s formula will not call for 6 cups flour, for example.

To demonstrate to yourself the importance of weighing rather than measuring by volume, measure a cup of flour in two ways:
(a) Sift some flour and lightly spoon it into a dry measure. Level the top and weigh the flour.
(b) Scoop some unsifted flour into the same measure and pack it lightly. Level the
top and weigh the flour. Note the difference.No wonder home recipes can be so inconsistent!

The baker’s term for weighing ingredients is scaling.
The following ingredients, and only these ingredients, may sometimes be measured by volume, at the ratio of 1 pint per pound or 1 liter per kilogram:
o Water o Milk o Eggs
Volume measure is often used when scaling water for small or mediumsized batches of bread. Results are generally good. However, whenever accuracy is critical, it is better to weigh.This is because a pint of water actually weighs slightly more than a pound, or approximately 16.7 oz. (This figure varies with the temperature of the water.)
For convenience, volume measures of liquids are frequently used when products other than baked flour goods-such as sauces, syrups, puddings, and custards-are being made.

Units of Measure
The system of measurement used in the United States is very complicated. Even those who have used the system all their lives sometimes have trouble remembering things like how many fluid ounces are in a quart and how many feet are in a mile.

The Metric System
The United States is the only major country that uses the complex system of measurement we have just described. Other countries use a much simpler system called the metric system.