Probably the most important ingredient for making any kind of cake is the flour and while most people rely on just one, self-raising flour, for most things, there are lots of others to choose from. It might surprise you to know that there is a right kind of flour for 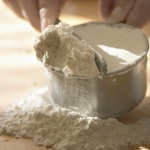 everything and that the choice of which to use for what largely depends on the amount of gluten the flour contains.

For cake making soft, low gluten, flour works best as such a high rise is not needed and it gives a closer, finer texture to the finished product. Biscuits and shortbread need even less rise and that is why corn flour or rice flour is often added to the ordinary flour.

Most people who are making a cake for their family will probably just use self-raising flour from a packet they have bought during the weekly household shop and this will normally produce a perfectly satisfactory result. If, however, you get really into baking you will discover that there is a lot to learn about flour, the various types, which sort works best for which recipes, the different combinations, when to add a raising agent – I could go on and on – and there are many excellent books on the subject. 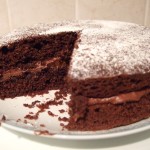 The other ingredients necessary for making cake are a fat of some sort, butter, margarine, lard or oil, eggs and probably the most important, especially for sponge cakes, sugar.

Caster sugar is the most commonly used but each of the other sorts of sugar, granulated, icing and the brown sugar family, can be used to good effect in the right recipe. Syrup, treacle and honey all have their place, as do spices, essences, fruit, nuts and peel.

A word of warning – unlike quite a lot of the culinary arts cake making is fairly precise and weights and measurements should be taken reasonably seriously, as should oven temperatures and cooking times.

It’s fun to bake and it is quite easy for it to become a serious pastime. Homemade cake tastes just wonderful and the smell of something baking is one of the most evocative – right up there with bacon, coffee, frying onions and toast!